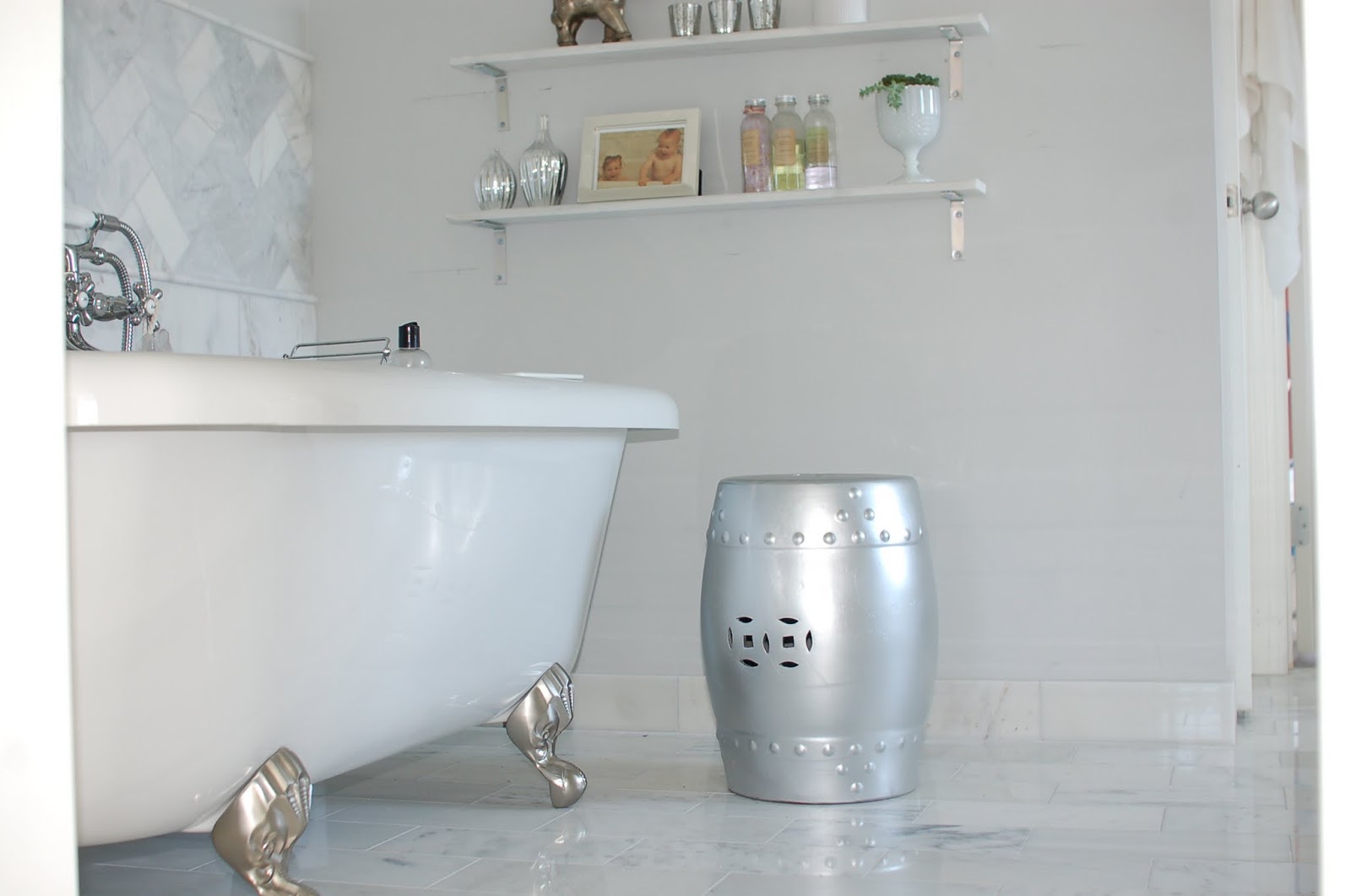 Things are crawling along with the last 15% of our upstairs addition! Seth and I have been living up there all summer--we just climb a set of temporary stairs to get there. Every couple of weeks I will wring my hands and whine and flail about, and Seth will nod with a wholly unconvincing "concerned" look on his face, not listening, thinking he is placating me, and then we just decide to watch Burn Notice on Netflix (I am accepting TV show suggestions. Please note: I am woefully deficient in much of pop culture. There are huge gaps in my TV repertoire, mostly because of these selfish children. Gah, so needy).

Such is life with jobs, two wily little boys, and an ever-shrinking amount of free time.

We may not be able to cut and install stairs while chasing a toddler around the house, but we can install some shelves while he takes a nap, dagnabbit.

I spotted the idea to use marble threshold pieces as bathroom shelves in  Martha Stewart Living years ago and was instantly enamored. When I joined Pinterest, I sought out a picture of this feature so I could "pin" it and remind myself to do it someday.

I apologize for the teensy picture, but notice the shelves. They are simple pieces of marble threshold, mounted to the wall with shelving brackets. Y'all know I went a little marble crazy in my new bathroom, and this seemed like a fun, inexpensive way to add some purty shelves by the bathtub. Home Depot even carried threshold pieces in the same line of marble ("Grecian," which I am quite sure is mined in China) we used on the floor and feature wall. (Note: it feels super ridiculous to call something in my house a "feature wall," lah dee DAH, but I don't want to keep typing "wall behind the tub," so whatever. Feature THIS.)

Speaking of feature walls, as I seem to be doing: the wall behind the tub, she is so pretty.


The walls to either side are jealous of the pretty and want  makeovers. Well, sorry, wall to the left; the most you're getting is a towel bar or hook, IF that. But let's get on back over to the wall on the right.


The brackets I found at my nearest big box stores were either way too ornate or super basic. I decided to err on the side of super basic and purchased galvanized L brackets for 2.79 apiece. I chose to leave my threshold pieces at 36" long, but most big box stores will cut them to size for you if you purchase them there and ask nicely.

We couldn't find our stud finder (sidenote: does anyone else, when using a stud finder, find it hilarious to point it at your poor, beleaguered husband and make beeping noises, saying things like, "We've got a live one, HA HA"? Just me? Okay then. Poor Seth) and the ol' knock-on-the-wall technique was kind of tricky because there seemed to be a LOT of stuff behind the wall. I looked back through my pictures of the framing process and realized that, ah yes, there IS a variety of pipey stuff back there.

Anyway, we measured carefully and knocked on the wall like we knew what we were doing, and then I took the kids to the zoo and let Seth take the blame finish up. 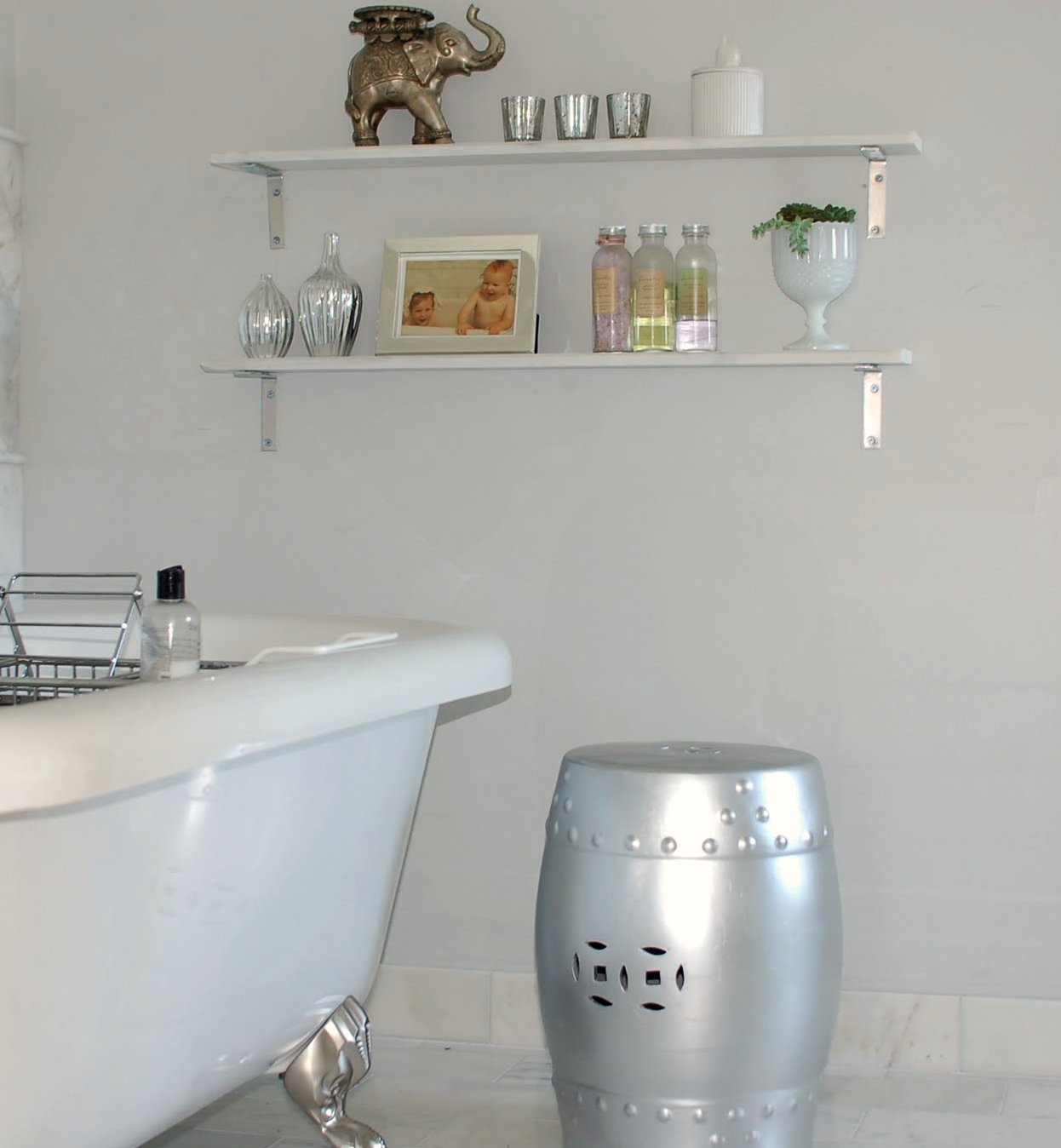 Styling these shelves will have to evolve organically, but for the time being, I scrounged around and borrowed from elsewhere in the house:
Ostensibly these are things I would use in the tub. Displaying the actual things I use while in the tub (a razor, Entertainment Weekly, a glass of the finest boxed wine, Crest Whitestrips, a somewhat frightening foot rasp, the WTF podcast) would be less charming. Or maybe not, what do I know? We'll try that little vignette next week.
Pin It
Posted by Emily at 8:17 AM No comments: