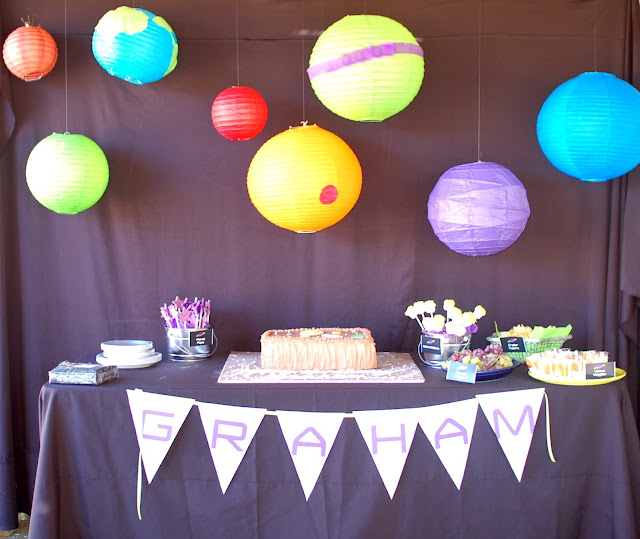 So Graham turned five! I know every parent experiences this (some experience it every year), but HOW IS HE FIVE?  I need to bind his feet and stop this "growing" business right away.

We celebrated with a party themed around one of his current obsessions: the solar system. He is very nitpicky OCD particular about whatever he's into, and he wanted me to know that he was not interested in aliens or rockets, just the solar system. Okay then.

We had the party at 2:00, so we kept the food to snacks (and cake and ice cream, of course!). We rented a bouncy house, which, while pricey, was FANTASTIC: it gave the kids something to do the whole time, it wore them out, and someone set it up before the party and took it away afterward (um, after I took my own turn bouncing up and down in there. So fun!). 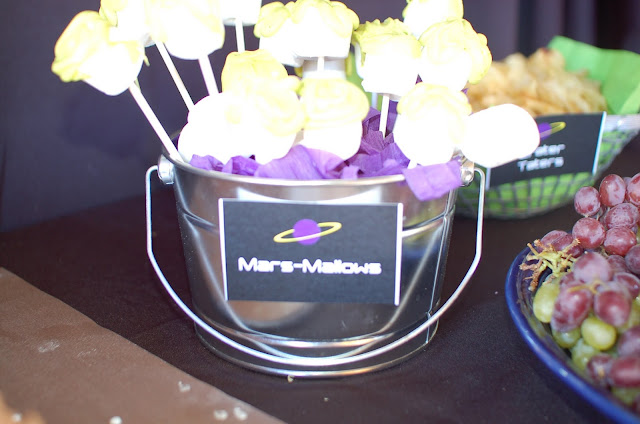 The combination of bright afternoon sun and shiny black fabric and paper made this too difficult for a non-photographer like me to photograph properly, but you get the idea. 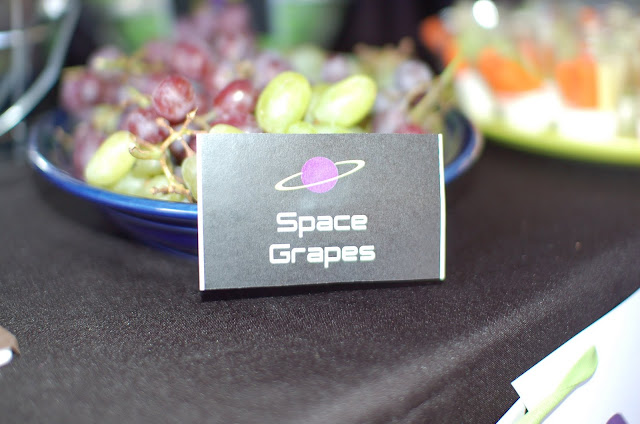 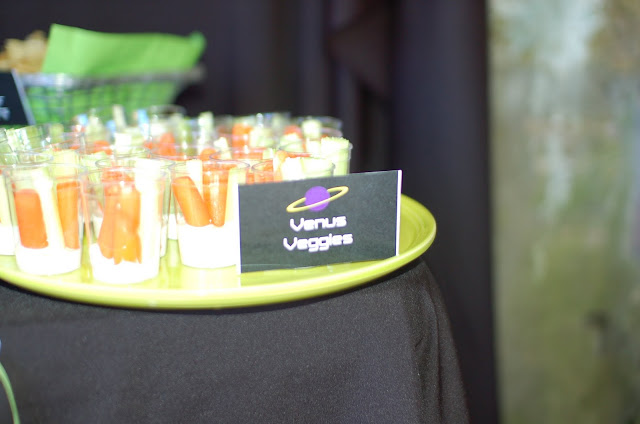 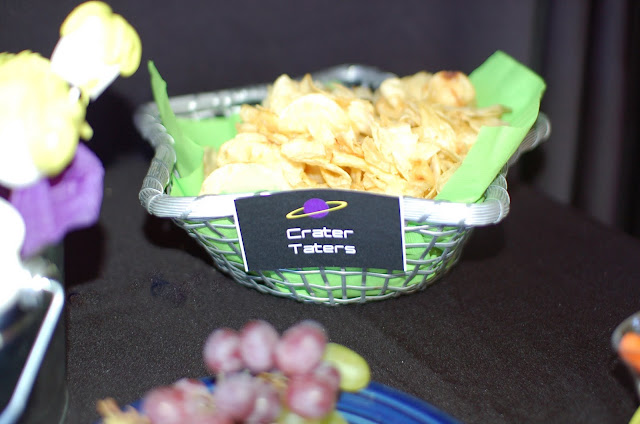 My mom made this beautiful cake to Graham's specifications. I found the little star candles at Deals, a dollar store. 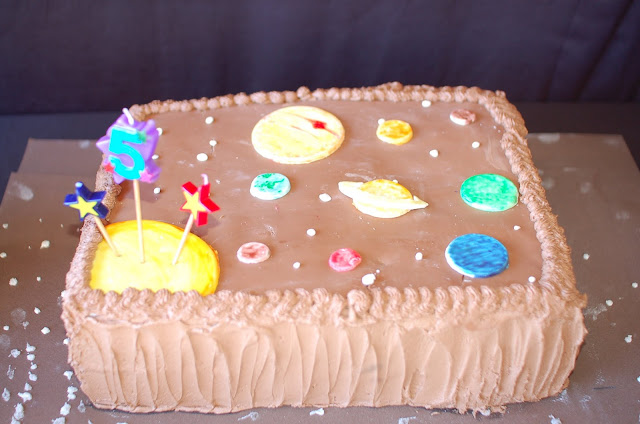 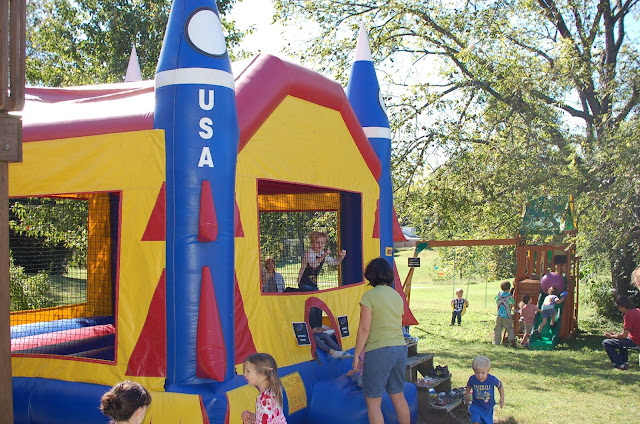 It was surprisingly difficult to find a moon bounce that was space-related. I must have looked at 100 different options, from a dozen different local companies. They all seemed to have Shrek or Cars 2 or princesses or something on them. I did end up finding one with rockets (I know! No rockets! But rockets made more sense than a Kung Fu Panda 2 bounce house, okay?) from Jump Jump Bounce in Murfreesboro. They were great, and I highly recommend them. (Also, we ended up getting to have the bouncy for six hours, so I got to invite a couple friends over for post-party beers and bouncing. Just a suggestion.) 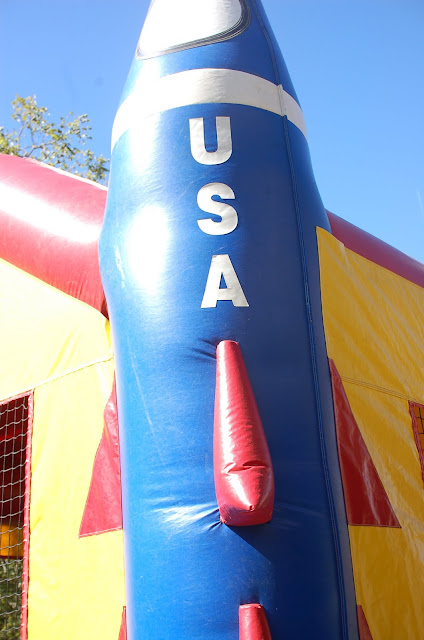 I don't think I got a great picture, but I made signs that said "Astronaut Training" and put them on either side of the entrance to the bounce house.

We wanted to have a couple other activities besides the bounce house, in case it got too crowded in there. 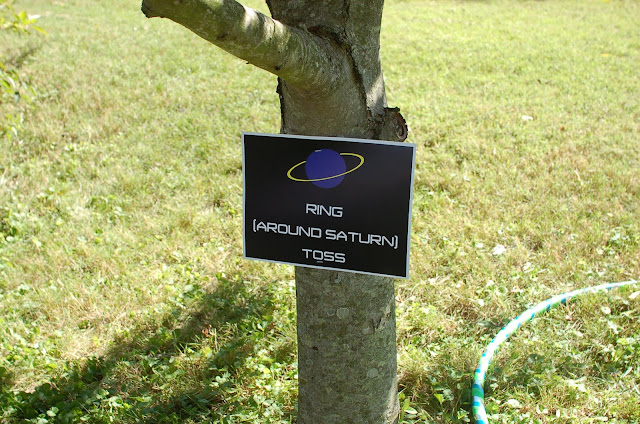 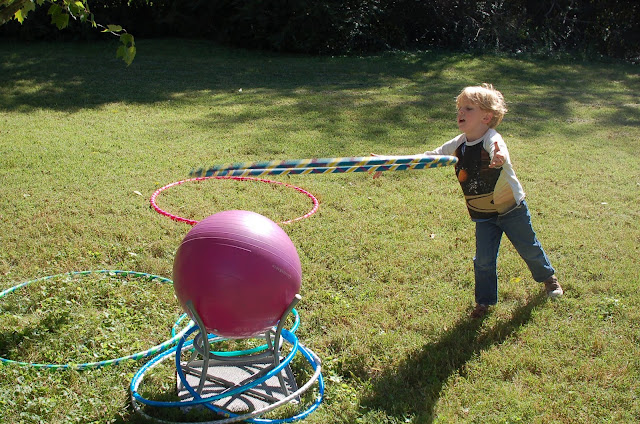 Some hula hoops, an overturned table, and a fitness ball = ring (around Saturn) toss. 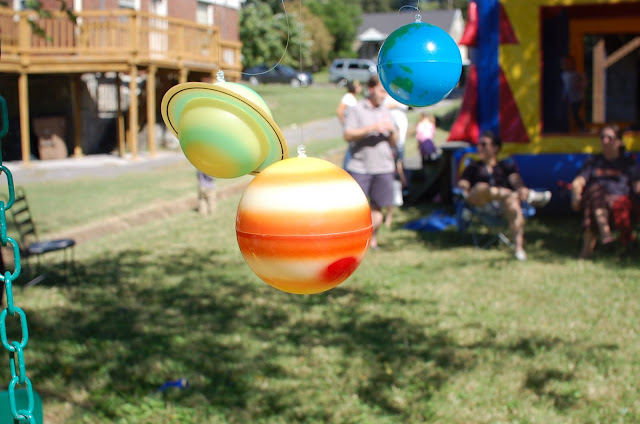 I dragged a lot of Graham's space crap collectibles out to use for decorations (use what you have! Always!), and I thought I'd hang these from the swingset and let kids shoot at them/launch rockets at them/whathaveyou, but of course this just ended up in the kids' shooting each other with the cheapie ping pong ball guns I provided. Well, at least they did until the guns all stopped working--one plus of buying dollar store party favors. 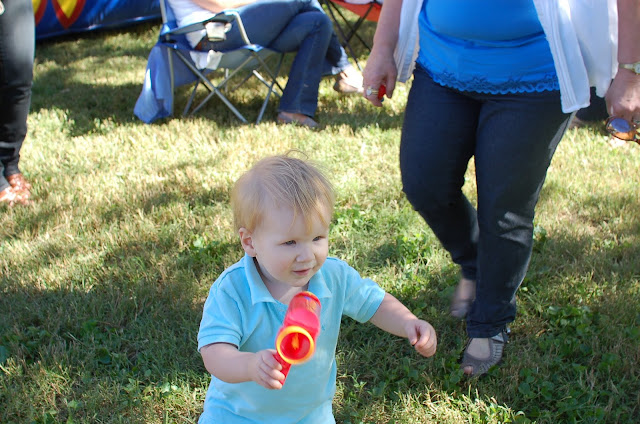 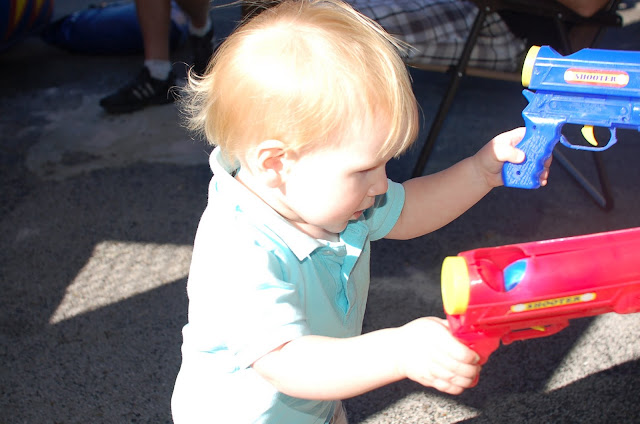 This was baby Dean's first exposure to toy guns, and boy did he love them. Mother of the year, right here. Stay tuned for his violence-themed second birthday party next spring! 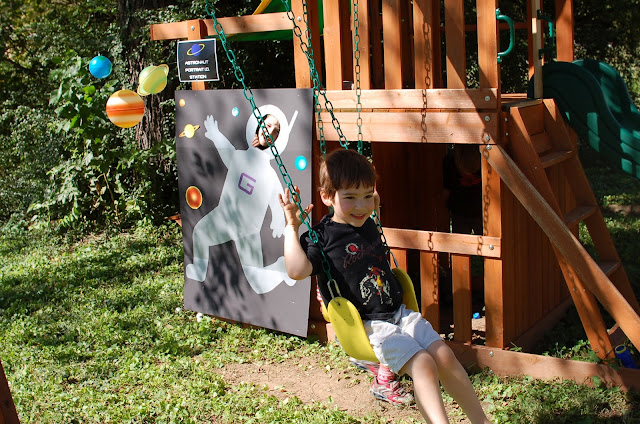 I made a little "Astronaut Portrait ID Station" photo booth from foamcore and Graham's own vinyl decals, and the only place I could find to hang it was on the little back "clubhouse" portion of Graham's swingset, which faced right into the blinding afternoon sun. Sorry, kiddos! Squint at me and say cheese! 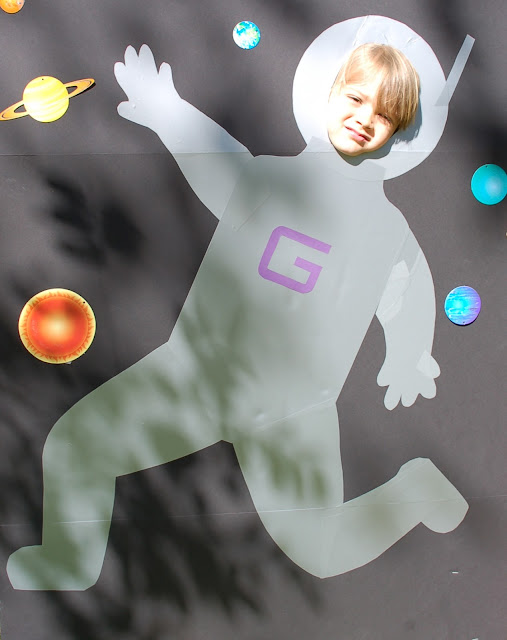 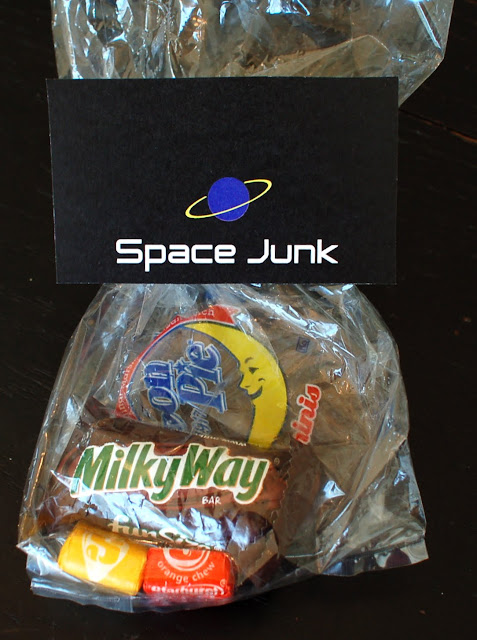 For favors, I gave each kid a bag of treats with space-related names: Starburst, Milk Ways, and mini Moon Pies! I named it, lazily, Space Junk. Yes, my theme disease led me to make a dumb joke about space pollution. But it is junk! And from space! 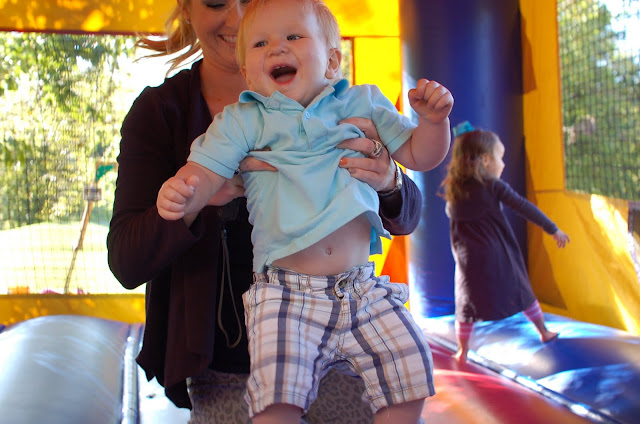 The biggest hit by far, though, was the bounce house. Seriously. I want to rent one for my own birthday. 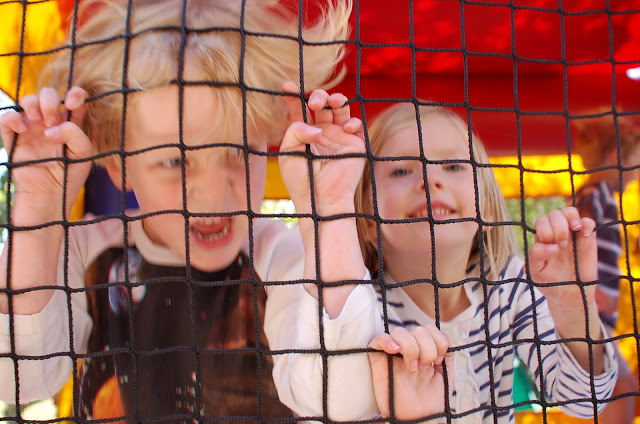 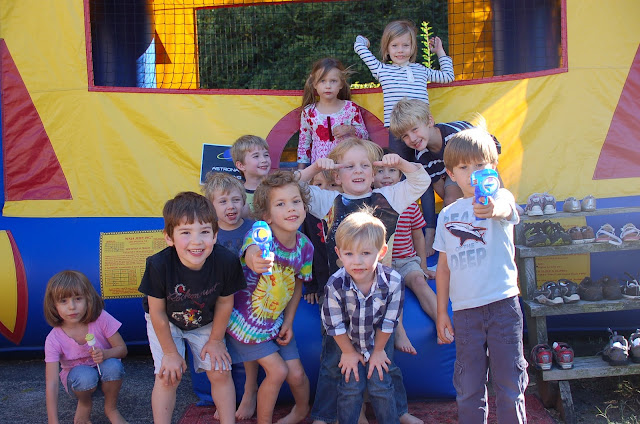 Happy birthday to my big kindergartener! You are my favorite five-year-old in the world.
Pin It
Posted by Emily at 6:22 AM 1 comment: