Man, time stands still when you are waiting for a second toilet. It's a fact.

By this evening, we should have plumbing connected/running/live/all systems go in ye olde upstairs bathroom. So excited! Here is where we stand right now. (I SWEAR I will have someone with a real, grown-up camera take pictures of this when it's done. And hey, it will just look that much better next to my smudgy iPhone "before" shots.)

From the top of the steps, looking left, the doors that lead to our bedroom:

Bedroom light fixtures are in, one coat of paint up. Our painters are so lazy! Wait, we are the painters. Oops.

Slightly better shot of the light fixture, which will be over the bed if we EVER FINISH. I liked this fixture (the Emma, from Overstock) because it's flush-mount, which we need for the 7.5' attic ceilings, but it has a chandelier quality to it. It's a little more girly/blingy/glam/whatever than I would normally go for, but I'm kind of steering the bedroom in a fancy direction, to my surprise.

Back across the hall to the bathroom. Through a pocket door (which will be painted white):

The shower, she is tiled!

I love it so much. HOWEVER, here is a good lesson for everyone. Just because you have the room  (and the crazy greed) to make your shower humongous, please take standard sizing into consideration. I liken this to the time Homer Simpson designed a car. Because the shower is not a standard size, we'll have to have glass custom cut for it. To the tune of, oh, $1800. Which we do not have at this point in the remodel, after paying for all of the other bathtastic stuff. So the shower will remain doorless for a while. We'll probably improvise with a curtain of some sort for the time being.

I hope that whoever is nice enough to come take pictures of my bathroom can capture the marble better than my phone. It is so pretty, but my pictures make it look dirty and yellow.

Our genius tile guy cut one 12x12 marble tile in half to make two corner shelves.

Vanity from another angle (on the other side of that window is the shower):

Where my precious the tub will go (gotta touch that paint up!). Again, my "camera" (phone) makes it look so yellow. Too bad I can't buy a real camera since I went and spent all my money on marble. Oh, the irony. It's like O. Henry crafted this tale himself. What?

Anyway, that's obviously a very rough and hasty peek, but hopefully I'll have a gorgeous tub in place to take horrible photos of tonight!

Here's what's left to do:

-finish puttying/priming/painting (we took this on in order to cross a whopping $2100 off our contractor's estimate)
-install permanent stair treads (I think we're going to do this ourselves. See: the part about running out of money)
-bannister/railings/newel post
-figure out the flooring situation for the landing/hallway area
-have carpet installed
-move all our crap up there and enjoy having a bedroom larger than a phone booth! Pin It
Posted by Emily at 12:30 PM No comments:

Email ThisBlogThis!Share to TwitterShare to FacebookShare to Pinterest
Labels: my house, remodeling

I am beyond excited to share this party with you! Last weekend, I had the honor and privilege of helping with a very special event for an even more special young lady.

Make A Wish Foundation of Middle Tennessee grants wishes to children with life-threatening illnesses. Milla, a seriously cool fifteen-year-old, is about six months into the two-year recovery process after a battle with leukemia. She has faced so much in her young life, and through it all, she has been inspired and cheered by the Harry Potter books. Her wish was to go to the Wizarding World of Harry Potter at Universal Studios in Orlando.

When Make A Wish grants a wish, they like to have a "wish party" to give the honored child the official news. The folks at Nashville's beloved Parnassus Books hosted Milla's wish party, and the beautiful bookstore proved to be the perfect setting for all of the Potter paraphernalia.

We wanted to do something to fill the large vertical space--the ceilings at Parnassus are so high! My mom and I made two felt banners for each house of Hogwarts, hanging four down the center of the room and the other four along the side walls. 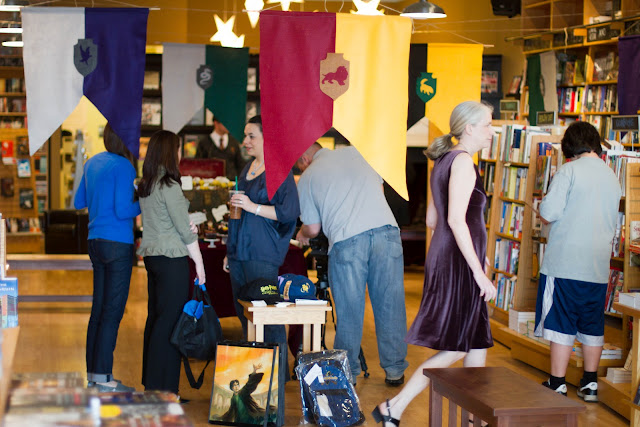 Above the register, we hung "floating candles," reminiscent of Hogwarts' great hall.  I doubt that the  Hogwarts set designers used toilet paper tubes and battery-powered tealights, but I think these came together beautifully. These were easy to put together, but tricky to hang from the 20-foot (?) ceiling ductwork and plumbing. Luckily, Patrik, a very tall Parnassus employee, helped out. 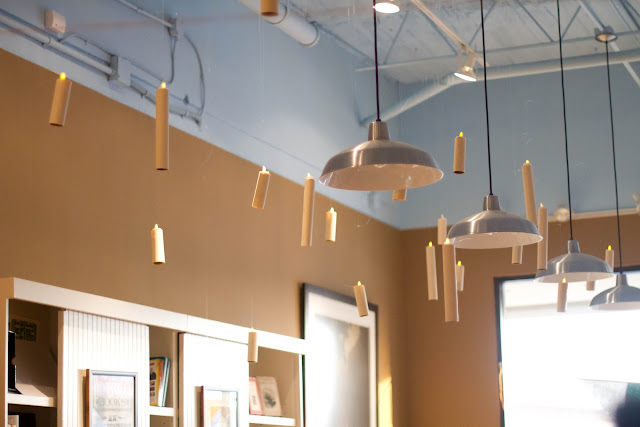 These were more impressive the later (and darker) it got. I will definitely be using them again for some occasion, whether they're theme-appropriate or not. Mother's Day? How about some floating candles? Baby shower? You know what babies love? Floating candles. It's true; look it up.

You GUYS, the folks from the zoo brought AN OWL. And not a big scary one with long talons and a sharp beak and a spinning head (not that I was scared that's what was coming--that would be crazy!), but a teensy, precious guy who was even named Pigwidgeon. 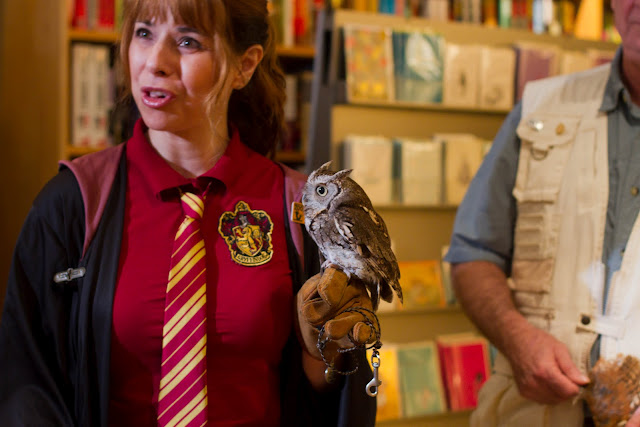 It was all I could do not to take him home with me.

Supercool Niki from Parnassus had rounded up some amazing gifts for Milla, donated by generous Etsy sellers. We had the fun idea of delivering them via owl post. We had seen some fun owl balloon ideas floating around (GET IT? HA HA) on Pinterest, and this seemed the best way to put those into action. 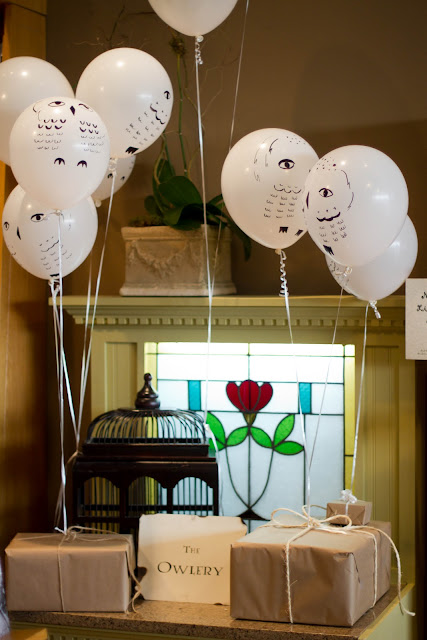 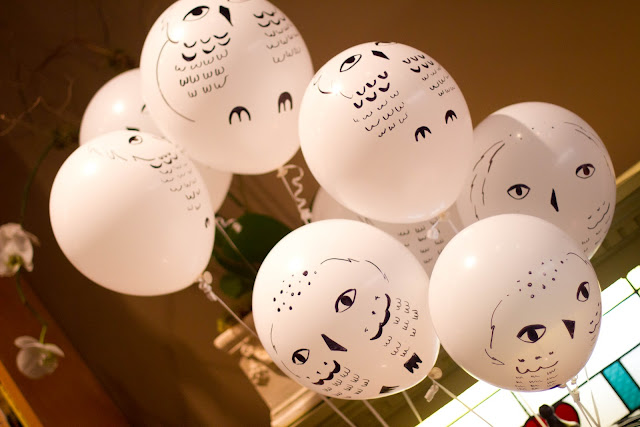 Delightful Parnassus intern Yashwina made these whimsical flying keys, a nod to one of the obstacles Harry, Ron and Hermione face in Harry Potter and the Sorcerer's Stone. She also made ME feel as ancient as ol' Nicolas Flamel himself (ten points to anyone nerdy enough to catch all that), but that is neither her fault nor relevant. Ahem. 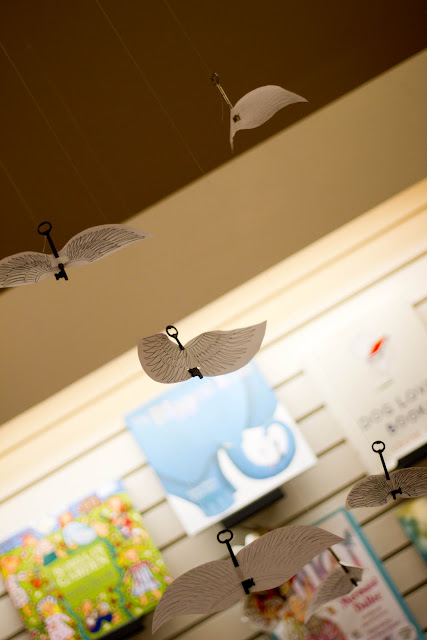 We transformed one corner of the store into a "Transfiguration Booth," the Potter-ized version of the requisite photo booth. 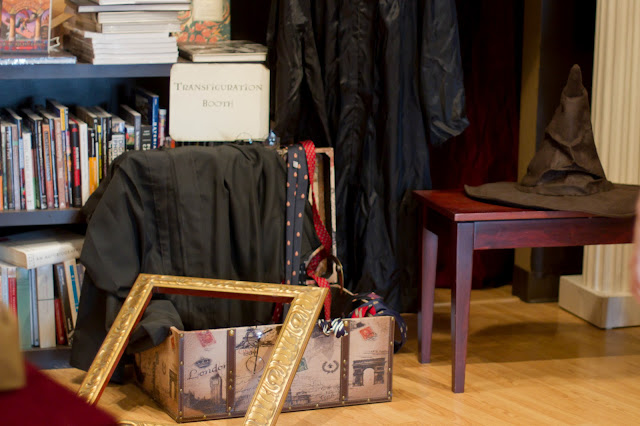 I took one my son's dress-up trunk and emptied it of his things, filling it with borrowed graduation robes, ties that roughly corresponded to the houses of Hogwarts, Harry Potter glasses, and a homemade pair of Luna Lovegood's spectrespecs. We threw in a gold picture frame so people could pretend to be talking portraits. 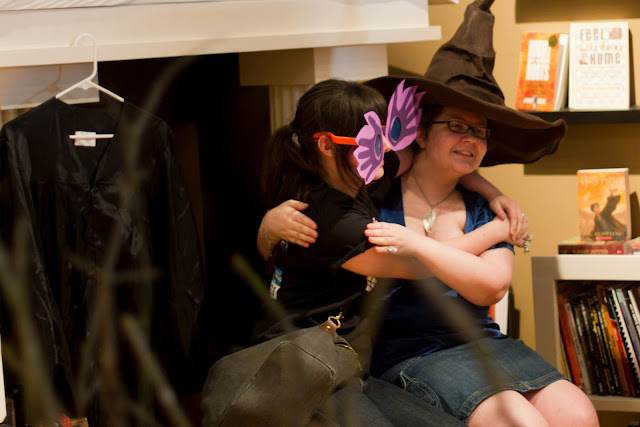 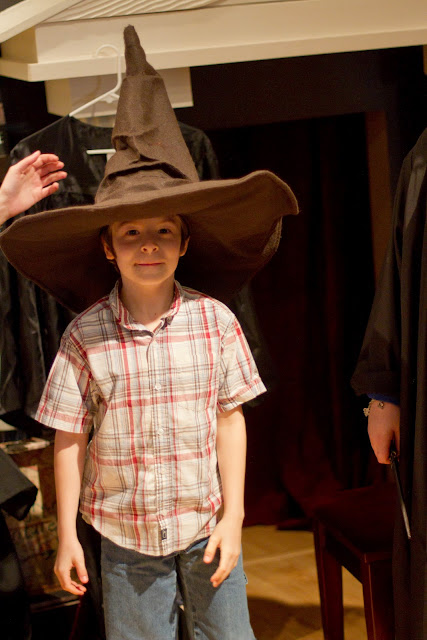 My mom MADE that sorting hat. Just MADE IT, out of felt and pure awesomeness. I'm sure if I had given her more than a week, she could have made it come to life and actually sort us all. I mean, look at that hat! 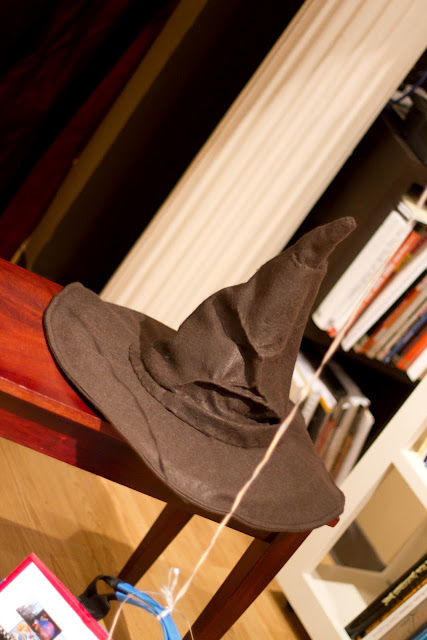 We served snacks and sweets, and of course I had to label each one with a Rowling-approved name. The Painted Cupcake donated some delicious and incredibly decorated cupcakes. 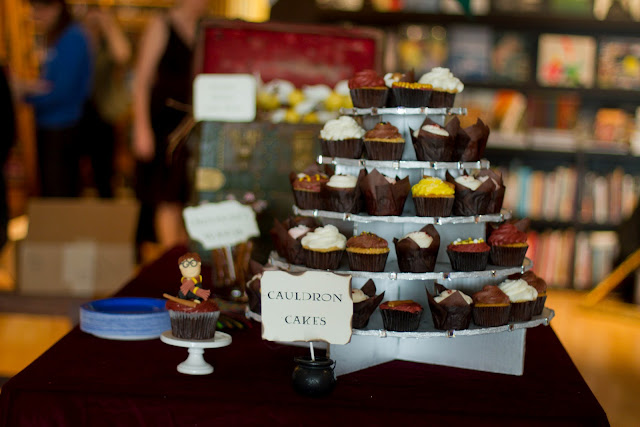 I just have to gush over the special cupcake they made for Milla--with a fondant sculpture of Harry sitting on top! 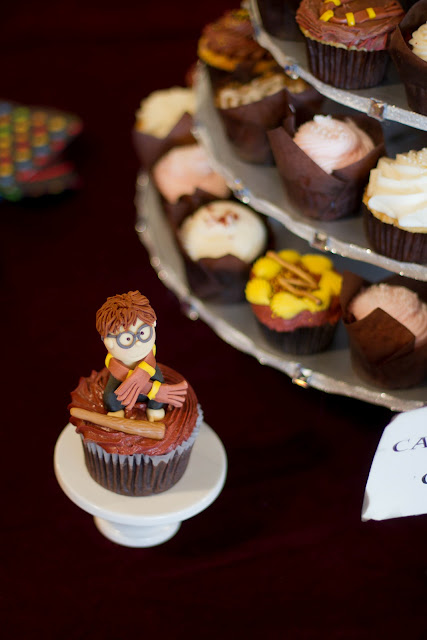 Amazing. Other cupcakes had clever designs like lightning bolts, wands, and Gryffindor scarves. I am no artist like the staff at the Painted Cupcake, but I did try my hand at some golden snitch cake pops. 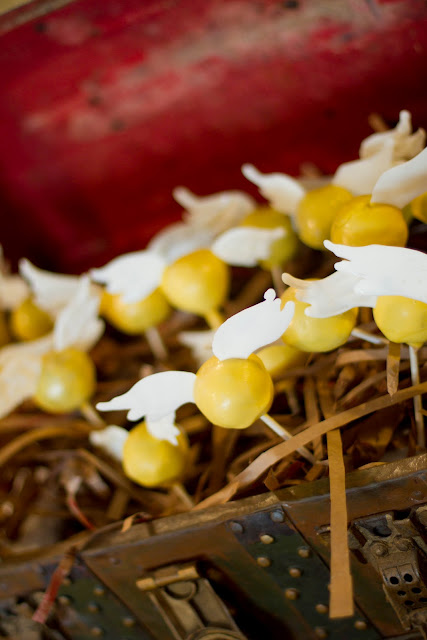 I displayed them in a small antique trunk that my grandmother gave me--she thinks it's probably an old ammunition chest; I thought it would make an awesome quidditch supply trunk. 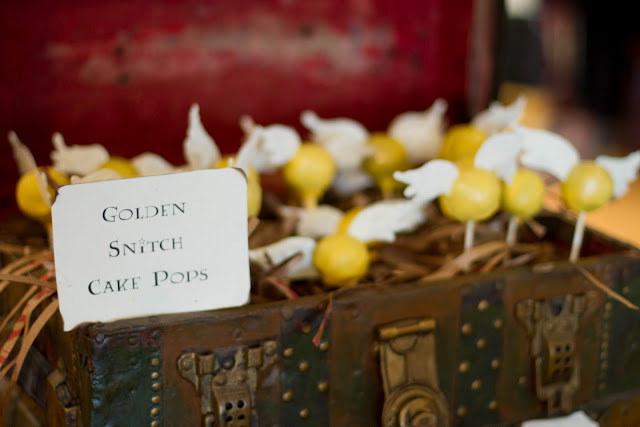 I also made the easy-but-delicious pretzel wands, as well as some less-photogenic "sorting hat" cookies out of ice cream cones and chocolate cookies. 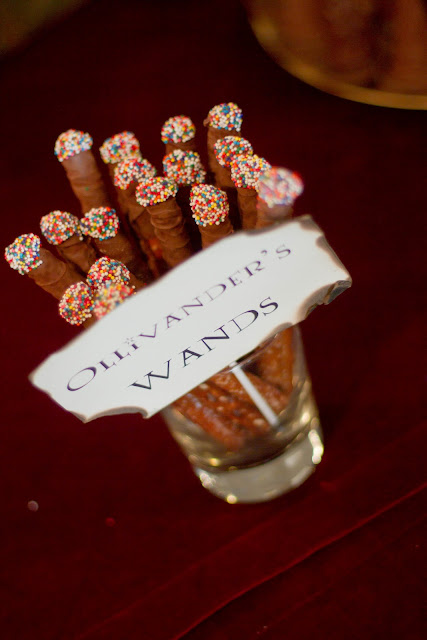 We offered a salty counterpart to all that sweetness with my old favorite, broomstick popcorn bags: 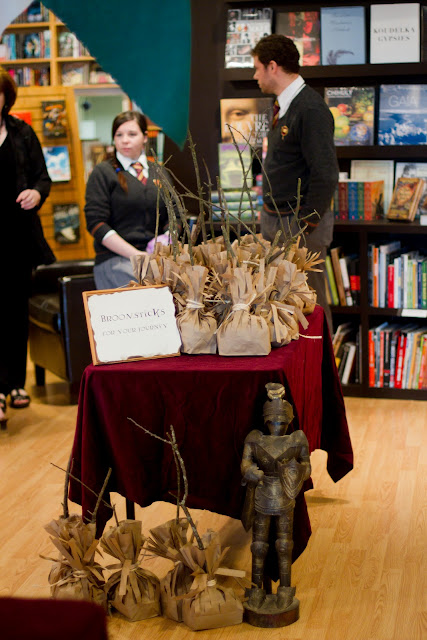 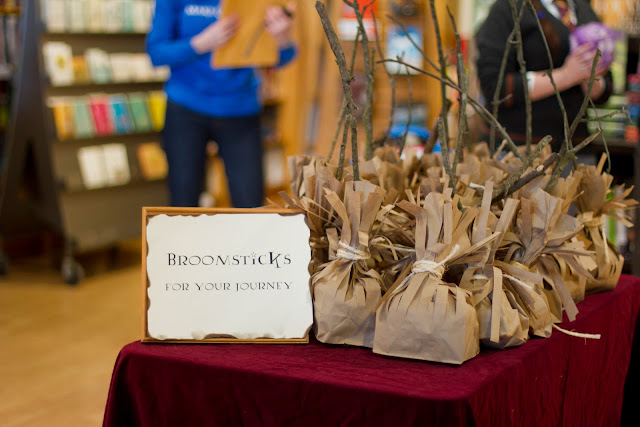 Quick sidenote; the tablecloths here are actually my old living room curtains. Just thought you should know. I hated them in my living room forever, but they have been great in so many other incarnations. I think they really work here and look . . . Hogwartian? Help me out.

We had some punch and water to whet everyone's whistles, and of course, those were served over in the "potions" area, which we staged over by the store's piano. 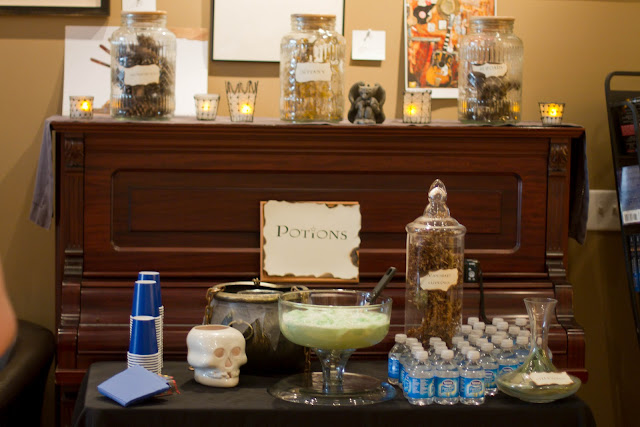 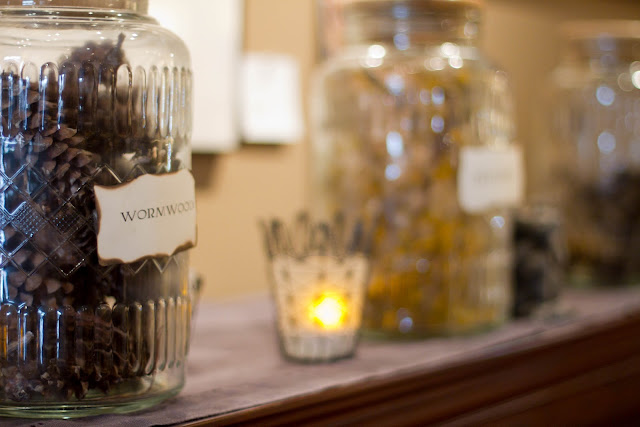 Okay, they were really things like dried echinacea and hydrangea, some pinecones, a clump of daffodil leaves, but you get the point. They looked official. Plus, they totally validated my complete neglect of our landscaping. 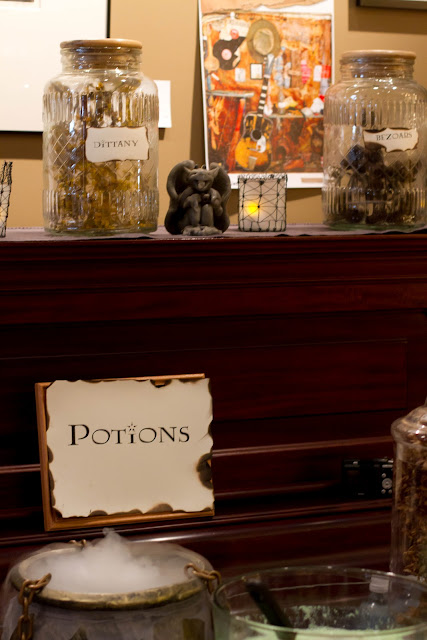 We had a little dry ice in a cauldron behind the punch bowl, for that authentic potions class vibe. Dry ice is a lot of work to maintain over the course of a party. Or at least it was until we were cleaning up, and THEN the dry ice decided to put on a show for everyone and be all dramatic and smoky. TOO LATE, DRY ICE.

But seriously, folks. Milla, it was my absolute honor to share in this fun and special day with you. I know your trip to the Wizarding World of Harry Potter will be amazing (and well deserved). Thank you for being such an all around great kid AND for liking my favorite books--I mean, I would have gladly helped throw you a Twilight party or whatever, but thank you for being so much cooler than that. You found inspiration in Harry and his friends, and I have found it in you. 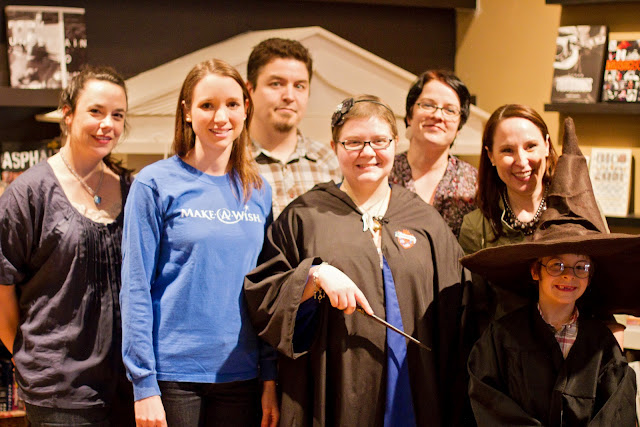 Well, the upstairs renovation is creeping slowly toward the finish line. The bathroom is looking gorgeous, everything else looks pretty much the same, and the bank account is an empty little ghost town with tumbleweeds rolling through it.

Back to the bathroom, though! Our floor and shower have been tiled. By the time I get home today, I hope they will have been grouted as well. Here's a sneak peek (sorry about the paper. But isn't it MYSTERIOUS?).

Here's an equally "mysterious" shot from a little further into the room.

Our meticulous and lovely tile guy, Viktor, was run off on Friday by tornado sirens and hail (apparently he chose to brave his chances DRIVING through TORNADOES rather than retreat to the basement with us). We huddled in the basement, watching the storm's progress through all kinds of . . . interesting towns I'd never heard of.

We saw golfball-sized hail hitting our tiny basement windows and heard winds howling outside. When we emerged, we saw what hadn't melted away in the freaky eighty-degree heat.

And it took us a little while to notice this, but the storm did leave a little bit of unfortunate damage.

Graham is being a trooper. I told him we would try to fix it, but I have no idea when we'll have time, and that's the truth! Every spare minute that's not taken up with work or the upstairs renovation is filled with parties and projects.

In the next month, we have