Well, another birthday has passed, along with another promise to my husband that we would just do Chuck E. Cheese's or some bouncy place next year. But Graham had a blast, and all the kids there seemed to have fun, so all the hard work was worth it.

Enough blather, on to the pictures!

I made a little sign for our mailbox to point guests toward the back yard. I tried to base it on the vintage sign at the local Madison Bowling Alley. I really wish I'd had time to make some nice cardstock letters for this, but time was running out (literally, we had about 20 minutes until the party started), so I smeared some paint on it and called it a day.


I borrowed my in-laws' cute vintage table for the snacks. I hung the banner over it. My mom hung some sheets on either side to cover some of the grubbiness of our garage door. One year I'll make a backdrop, but this wasn't the year. "We" (meaning Seth, 100%) had a swingset to put together this time.

My humble attempt at cake pops. They sort of looked like bowling balls. I think? Anyway, they tasted goo-ood, and I totally see why bakers charge $2-3 a pop now.

The pinata, may she rest in peace. This was a messy job, one I wish I had started a couple weeks before the party. I'm going to act like I meant for it to be vaguely mummy-esque.

Bowling pin and ball candles! My mom made the adorable cake. That bowling lane is fondant!

Favor bags--more on these later!

The kids attempted to actually bowl with the giant bowling set for about 5 minutes. Then, just as all of the reviews warned me, the kids went all Lord of the Flies with them and began chasing each other with them, and then (thankfully) just chasing and whacking the ball with them. I must say, this set was sturdy!

Graham had more sugar that day than in the last year. But that's what birthdays are for.

Photos courtesy of my sister, Laura Covington, and my sister-in-law, Kara Knox.
Pin It
Posted by Emily at 10:46 AM No comments:

Countdown to the Bowl-O-Rama

Graham will be four years old in TEN DAYS. SOB. I don't even understand where the time went.

His party this year is Graham's Backyard Bowl-O-Rama. I haven't gotten everything (well, actually anything) completed yet, but here's a peek at the banner I'm putting together.

It's horribly photographed, in my longstanding tradition .Ooh, and horribly "stitched" together with my useless panoramic feature. All stitched up like Frankenstein's monster.  Luckily, my talented sister and sister-in-law will be present for the actual party to get non-horrible photos. You'll have to trust me that it actually looks quite cute in person. There will be a bowling pin on each end, and the circles are glittery, like bowling balls.

I made his invitation in Publisher, and I was pretty pleased with it, considering it's all just text boxes and clip art. 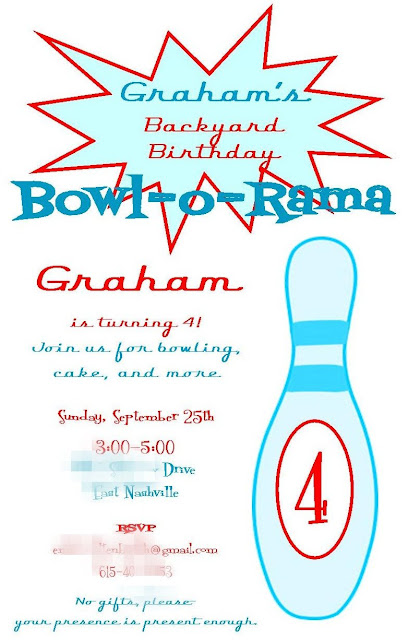 More pictures to come, whether you care or not!
Pin It
Posted by Emily at 5:15 PM No comments: