So! Here I am (Mom, and my one sister who might be reading this?). I didn't mean to stay away so long. I don't have much of an excuse beyond being busy and pregnant and kind of wimpy. Speaking of which, I'm having a baby in um, 12 weeks. At the most. I'll probably have to have an early c-section in 11 weeks. I'd better get this nursery business wrapped up so this child won't have to sleep in a drawer.

(My friend Mimi is having a girl at almost the same time, so we're going ahead with the Penny Carnival shower theme, and oh-em-gee, is it going to be cute. I can't wait to share pictures.)

I am having boy #2, and I still like most of the red and blue nursery I posted before, so I've forged ahead with that. A few things have changed my original ideas. The first: lack of space in this tiny room (9x10) means I can't fit a changing table AND a dresser in, so I decided to try to find a low and long dresser, the top of which will double as a changing table. I got a crazy deal on a mid-century-esque Basset dresser on Craigslist (thirty dollars!), and the finish was beat up enough for me not to feel guilty sanding and painting it. It currently has 5 coats of red high-gloss on it, out of the 342 that will apparently be necessary. Sigh. 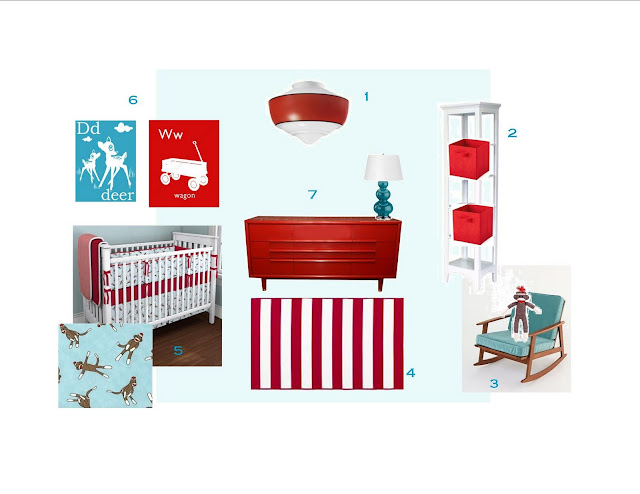 (The dresser in the picture is not mine, but it represents what I hope mine will look like!)

The second thing that changed my plans around a bit was my discovery of the baby bedding virtual designer at Carousel Designs. After fiddling around with the fabrics, I realized I didn't care for all the brown and cream in my first choice of sock monkey fabric, but I loved the blue option. I tried breaking up the print of the bumper and the skirt with a red crib sheet, stuck everything in a crib that looks pretty similar to the one we already have, and I loved it.

Rather than shell out $500 to purchase everything custom, I found the Moda Funky Monkey fabric on fabric.com, ordered $40 worth, and set my mom to work worked with my saint-like mother to make everything. So far, we've (SHE'S) finished the bumper, and it is looking fantastic. I will say that the fabric is a little more vivid than it looked in most pictures I saw, but I'm going to temper that with a super-pale aqua on the walls, so the room isn't too monkey-crazy colors-frenetic.

So, the bedding and dresser are almost ready to be checked off the to-do list. One of the rugs has been purchased, but it's tiny, so I hope to find an identical one to put next to it. The rocker is probably a no-go (too expensive), so I'll need to recover the cushions from Graham's glider (probably in red microfiber), and the $100-plus light fixture will probably end up being some sort of DIY effort (hold me). The book shelf pictured is similar to one I already have (that's followed me around since college), and I have bought the little cube bins to go inside. I'll feel better when I slap some paint on the walls in there.