Lil' Dee Dubya--Artwork in the Nursery 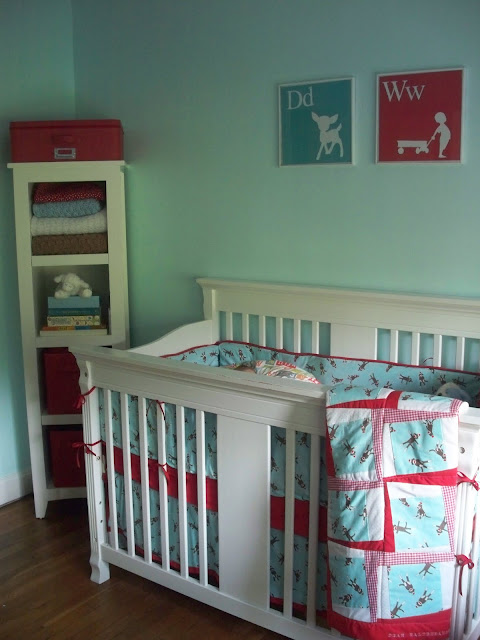 When I was pregnant with Graham, I tried to think of some fun way to display his name in his room. Then I gave up and went with the ubiquitous wooden letters over the crib solution. I think it's cute but nothing new.

With this new little nugget, I thought I might try initials instead. I had seen a few typography posters here and there and on Etsy, but none offered something I liked in the letters and colors I was looking for. I thought I might as well try my hand at creating something with whatever s(crap) I had lying around--it's free, and if I ended up not liking it, I could still go buy something else.

I had a lot of scrapbook card stock left over from Mimi's baby shower, some of it conveniently in red and turquoise. I searched online for silhouettes of images I liked, a deer (well, a fawn, because baby animals are cute. Except baby scorpions, which I learned last week. Thanks a lot, Zooborns.) and a wagon (being pulled by a little boy! Or a girl with kind of a mullet, whatever), to correspond with D and W. (New baby's name is Dean--have I said that here? Probably not, since my mother is the only one who reads this, and she already knows his name. Anyway, welcome, Dean Eliot!) I printed them out, cut them, traced them onto the white card stock, cut them again, swatted Graham away when he kept trying to take them, cut out some more for him to play with (of course he had lost interest by then). I then did the same thing with the upper- and lowercase letters for D and W (you could do this with a die-cut machine, if you have a font you like, but I just wanted old-school Times New Roman and I didn't want to pay $50 for a Cricut cartridge for four letters).

Card stock tends to come in weird sizes at the craft store. My sheets are all 12x12, which I thought I would need to trim to 8x10 to fit a standard picture frame, but then I remembered that we had some random LP frames lying around the basement that might work! 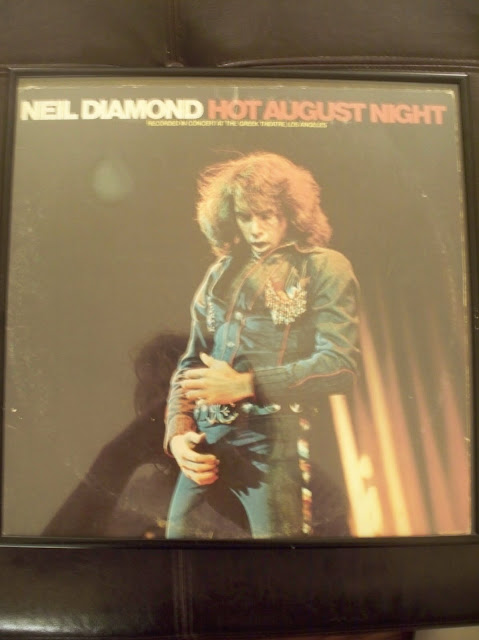 This is the LP Seth had chosen to frame. Hmm, I can't imagine why this never made it up on to any of our walls. 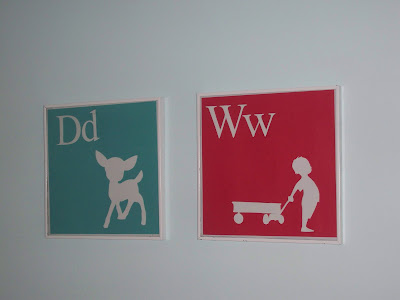 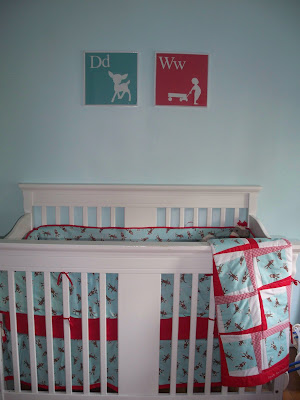 I spray painted them white. Then, I pieced together some pieces of white cardstock to fill the gaps around the edges--fake matting, if you will. 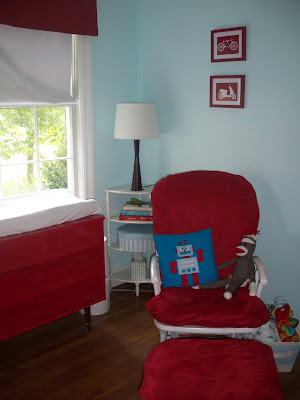 For the space behind the glider, I commissioned some lithographs from a local underground artist. I'm totally kidding--I found these for 3.49 apiece on clearance at Target. I am so lame. But look, a scooter--we have one of those! 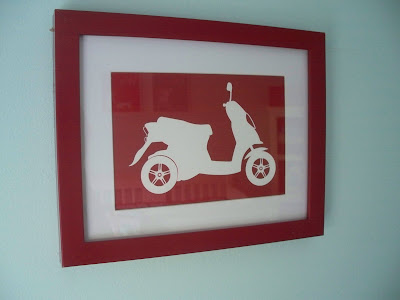 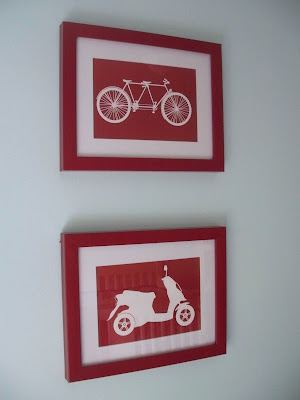 And a bike--we may even have two of those. It's been a while since I've visited that corner of the Hoarder Basement beneath my house. Sorry, bikes. Anyway, I pretty much had to buy these at $3.49 apiece. I couldn't have made anything that cheaply.

The other little piece of artwork currently in the nursery is an adorable painted canvas from my sister Mary Ruth--a cute take on  "See No Evil, Hear No Evil, Speak No Evil" featuring sock monkeys, hanging over the dresser/changing table. (Better picture of it to  come soon.) 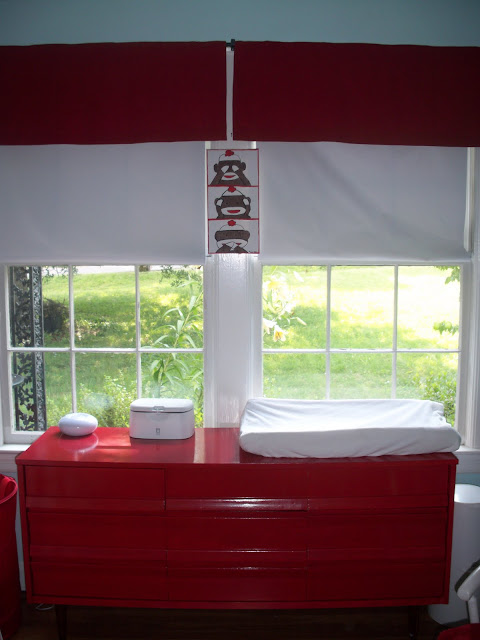 I have a couple other art-y things to put in the nursery, and if I ever get around to finishing them, you'll be the first to know. Pin It
Posted by Emily at 8:11 AM

I toootttallly love this! I just used these colors for my sons birthday party :)