Dang. Just as I feared, details about the proposed 90210 spinoff are emerging, and things do not look so good. Who are these Mills people and why should I care about them?!? Actually, it's worse than I predicted! It doesn't even look like Belding and Screech Nat and David will be making an appearance.

But wait! There may be hope yet. Never one to shy away from the spotlight, Tori Spelling has already made it known that she is ready and willing to take part in the series, should the opportunity arise. I'm sure she's catching a lot of flack for this, but I say hear her out. Not so much where she says, "Well, I am a mom now, proud to say, but obviously too young to have a teenager, so maybe I could be one of the main character's young stepmom." Uh, hi, remember when you married David Silver? You wore a pearl choker and everything! Do those vows mean nothing to you?

But then Tori starts to make sense: "Playing the funny sex ed teacher at the high school would be funny, too, considering Donna Martin was America's most infamous virgin." I am totally on board with Mrs. Martin/Silver/Whomever-Else-Donna-Married-to-Become-Trophy-Stepmom being the West Beverly Sex Ed teacher. I think we all remember the brilliant speech she gave to the room full of cranky PTA parents debating condoms in school:

"If you build a pool, and you know your kids are going to swim, you can build all the fences you want. But if you know they’re going to jump in the pool, don’t you think you should teach your kids how to swim?"

Right! What? But what if I don't build a pool? It doesn't matter; don't think about it too hard. The point is, all the kids clapped, the parents nodded with furrowed brows, and everyone got a big basketful of condoms. Everybody won. 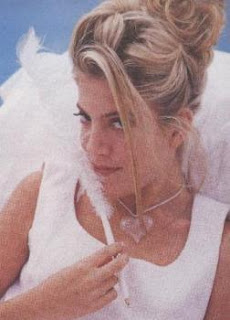 I hope the powers that be take heed and listen to Tori (not so much about the condoms--but hey, who are we to judge?--moreso about her place in the new series). No Brenda, no Dylan, no Peach Pit? They're going to need to throw us old people loyal fans a bone, and soon.
Pin It
Posted by Emily at 3:06 PM

I'm came across your blog while obsessively patrolling the comments on my boyfriend's blog (vintagemicrowave), and I think I'm in love with you? Or at least your blog? Or at least our shared worship of 90210?

Anyway, keep up the good work. Also, I don't get SoapNet. Can I come over? Just kidding, I live in California, so it would take me like a month to get there on my bicycle, and by that time, Season 4 will finally be out on DVD.