Inspired by Holly's post over at Decor8 asking, "How do you decorate your home on a budget?", I decided to dredge up my stagnant, never-quite-got-off-the-ground blog to document some of my, um, "design" projects. The husband and I have modest jobs, and especially since I've had a baby and switched to working part-time, everything I do is on a budget. Well, more of a pittance than a budget, but I like a challenge.


So, I'll start with my living room. A word of warning: I'm a horrible photographer, and many of these pictures are taken with a flash because it was nighttime. You'll have to trust me that the room is actually very sunny, when the sun is actually out. Okay then.

For reference, here is what the room looked like when we bought the house a few years ago:

Nice, right? We (optimistically) saw it as a blank slate. The room has gone through a few incarnations since those photos, including a sort of Friends-esque period of overstuffed furniture, murky paint choices, and clunky armoires. Think late-90s Pottery Barn meets poverty. Poverty Barn? That look was okay, but last year I decided I needed more streamlined furniture and a sunnier, cheerier color. So here it is, in its current state: 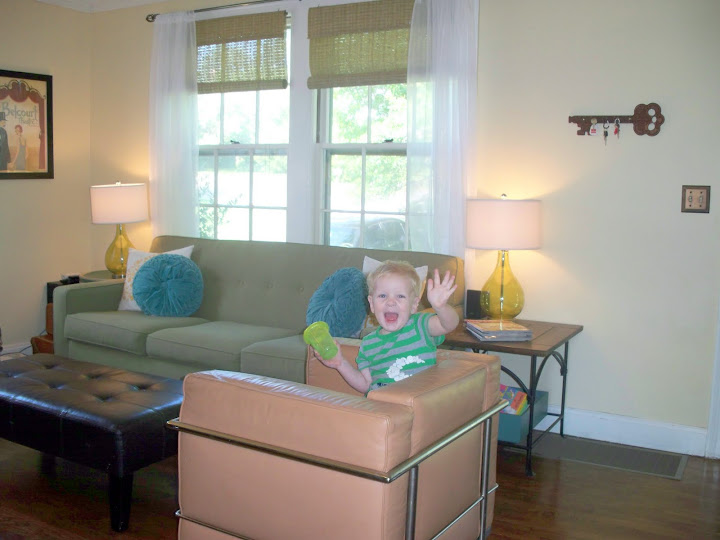 I painted the walls a pale, yellowy cream color (Ralph Lauren "Victoriana"). (I really need to touch up most of the white woodwork, but we'll see when that happens.) I drug two knockoff LeCorbusier LC2 chairs out of the basement, where they had languished since our home office became Graham's nursery. These chairs were a crazy steal--when I worked part-time at a women's clothing store right out of college, our store was remodeled, and the employees had a chance to buy the furniture. These were our "husband" chairs, where bored men sat while their ladies shopped. I paid a whopping FIFTY DOLLARS apiece for them, and they've held up great.

Our "coffee table" is a leather ottoman that I got on clearance at SteinMart (kind of like Marshall's or TJ Maxx) that used to be at the foot of our bed. This is much safer (I think) than a hard-edged table, since we have a 9 month-old toddling around now. Plus we can use it for extra seating in a pinch. The sofa, from Macy's Corona line, was the only big purchase we made for the room. I made throw pillows out of some Waverly fabric remnants (fifty cents apiece at my favorite fabric store). I kept the old window shades, which are from Pier 1 and made of woven hemp and paper. In the winter, I hang velvet curtains over them, which adds a cozy, layered look and has the added bonus of keeping us from freezing to death. I put a couple of sturdy floor cushions from Ross in an otherwise useless corner as a make-shift bed for our doggies, as a bribe to keep them off the new couch. 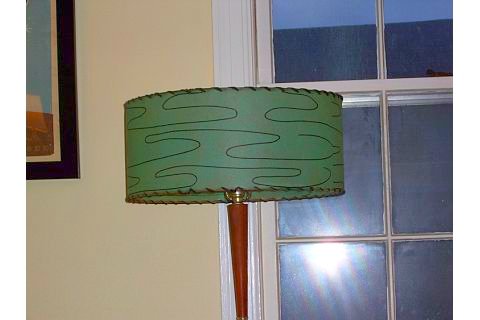 The vintage 1950s floor lamp is my favorite yard sale find ever. It set me back a cool $40.


The wall where the TV lives looked so bare after I got rid of the hulking armoire. I craved some lighting and cheerful artwork, but those things cost money. I had two matching Target gourd lamps in different rooms in my house, so I put them together atop two skinny Target Hudson bookcases to flank my skimpy TV stand. The flatscreen TV takes up less space, which is nice, but it left a huge void on the wall. I ripped pages out of a Cavallini bird calendar ($10 on an after-Christmas sale at Barnes and Noble) and put them in pre-matted frames from JoAnn ($8 each after those handy 40% off coupons from the Sunday paper). 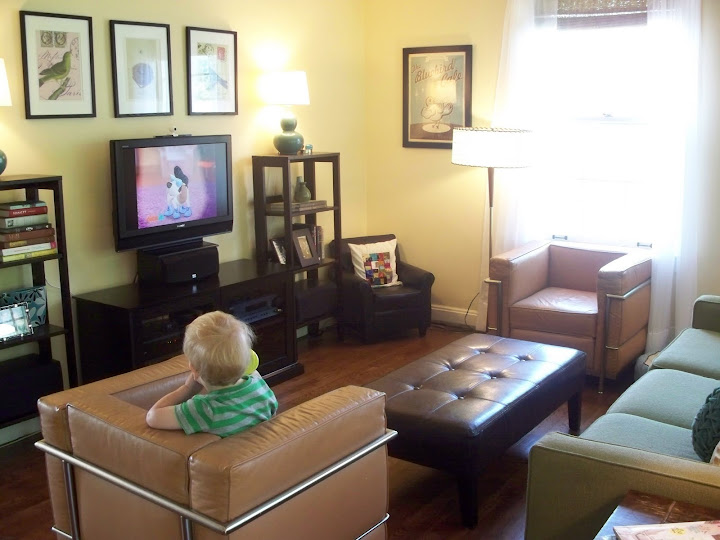 The fireplace wall is still unfinished. I have considered painting the mantel and mirror black or turquoise--I feel like there's just too much white going on here--and take that dingy, dated brass surround off of the fireplace, but I did want to share a couple of lucky, budget-friendly finds. The gigantic mirror was a hand-me-down from a friend who decided it wasn't "modern" enough for her. I was pleasantly surprised to see that it looked like it was made especially for my mantelpiece. The alcove to the right of the fireplace was a real problem spot. I get hung up on symmetry (or lack thereof), so I wasn't crazy about the random, DIY brown shelves on brass brackets that were there when we bought the house. I wanted something that would sort of mirror the coat closet on the left side of the fireplace. When I spotted the Ikea Alve desk and hutch in a Real Simple feature a few years ago, I thought it could work. I was thrilled to find the measurements were almost perfect. I drove to Atlanta, found the Alve pieces, and painted them to match our woodwork. We found the small, armless banker's chair at a yard sale for $25. Its small scale is perfect for the tiny space. Finally, I find some flowers from my own scrubby "garden" (if you can call my weedy front yard that) in an old glass milk bottle to be the epitome of cheap, cheerful decor.

(Update: we had to move the little rolling banker's chair to the basement after Graham started climbing on it--and falling off of it), so we replaced it with one of our dining room chairs. We also found a great turquoise rolling storage bin at World Market, which works great for our files since that secretary is effectively our home office. And I still haven't painted the mantel or mirror. I guess the white has grown on me!) 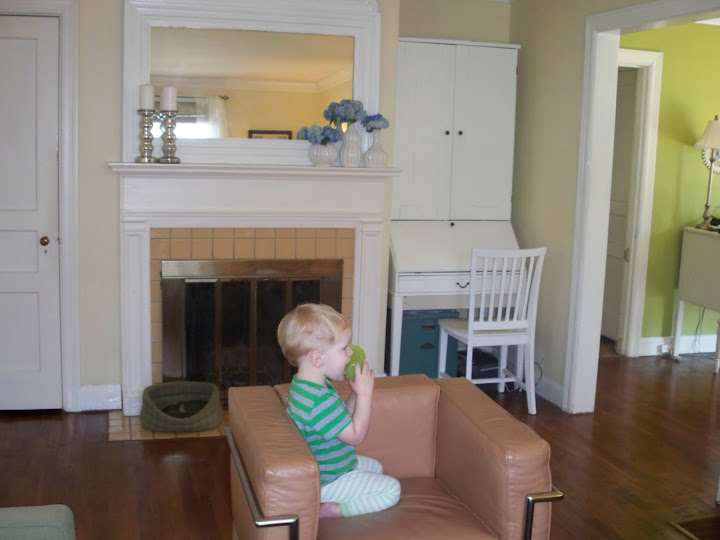 That was fun! Next up: my parrot-green dining room and my super-cheap kitchen remodel (AKA, an ode to Ikea and Target).
Pin It
Posted by Emily at 1:22 PM

Love your makeover. It's amazing what an impact lovely design (no matter the cost) can do in a space. Congrats...very inspiring!

GREAT idea, your blog. I will be following....