Well, Graham's map obsession continues, so we are moving ahead with the map-themed birthday party! 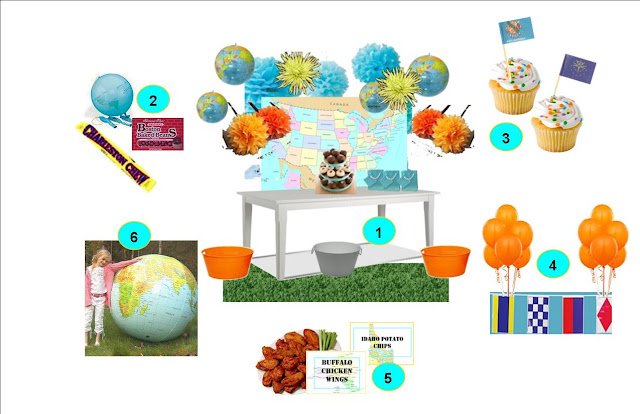 I've had a few fun ideas so far, and if I don't document them, I'll forget them completely, so here we go.

1. I had originally been looking at all kinds of vintage map textiles, but that was getting a little cluttered and expensive. I decided to back up and just use the map of the US, which Graham knows inside and out, as the backdrop for the dessert table and the starting point for the color scheme. In addition to the ubiquitous tissue paper poms, I'll be hanging some inflatable globes over the table. I happen to have an orange beverage tub (grabbed on clearance at Target for $1.14!) and two white tubs (they're reversed in the picture, oops).

2. In the favor bags, I'll have an earth punch-ball (which is kind of messed up, if you think about it. Punch the earth! Hit it!), and some nerdily named geography-themed candies. I have no idea what these candies taste like. Please tell me if they're gross.

3. On the cupcakes, would you believe, tiny toothpick flags for each state?! It was meant to be, right?

4. Our backyard backs up to a golf course, and it's not fenced. I need some kind of demarcation to keep the little ones wrangled and contained, so I think I will put up some stakes and hang a line of state flags, bunting-style, from them. And every few stakes or so I'll tie a group of balloons.

5. I am the queen of Beating a Theme to Death, so I'm carrying it over into the food. We're just having snacks (in addition to our ice cream and cupcakes), and so far the menu includes Buffalo Chicken Wings, Idaho Potato Chips, Hawaiian Tropical Fruit Skewers, Floriday Key Limeade, and Tennessee Tea. And Sierra Nevada beer for the grown-ups. Each item will have a little map-themed card, because God forbid anyone miss out on what a dork I am.

6. I can't decide how many games to do--a lot of these kids are three, and I don't know how long I can hold their attention--but I have to get one of these giant inflatable globe beach balls for them to throw around. I'm also considering Pin the State on the Map, and maybe a globe pinata (again with the violence against poor ol' Earth).

I'm quite sure I'm more excited than Graham is for his birthday at the end of September, but I know he will love the party. Pin It
Posted by Emily at 1:16 PM