Somehow I'm decorating not one, but two baby showers this Saturday. Somehow, they're at the exact same time! Luckily, though, they're also about 15 minutes away from one another. I will be doing some serious running back and forth, but I think the results will be worth it.

I've already talked a bit about Jennifer's shower, which I am excited to show you next week. The second shower is one that my friend Niki had planned to host for her sister-in-law, Erin. Unfortunately, Niki was in a serious traffic accident (on the way to a different shower for Erin, oddly enough) a few weeks ago, and she fractured two vertebrae. She BROKE her BACK. Because Niki is Niki, she was more worried about this baby shower than her three months of bedrest and rehab. My friend Sara and I offered to step in and take care of the decorations, and our friend Jenny from Pied Piper Creamery and her family at Pied Piper Eatery in East Nashville are taking care of the edible side of things.

I don't really know Erin, but Niki had some ideas that Sara and I were happy to run with. Niki wanted to plan the decor around her niece-to-be's bedding, the Love Birds set from Bananafish:

Sara and I are drawing from the bedding's cheery colors, the birds and the branches for our inspiration. This shower is being held at Niki's family's church, in a reception room. On the one hand, thank goodness for these kinds of rooms--they're often free or inexpensive, and no one has to deal with the stress of having an event at her own home. On the other hand, they're usually very beige and boring, so it takes a bit of creativity to liven them up. Sara and I are employing a "use what you have" mentality to create a cheery party on a very tight budget. Here's our plan, with real pictures to follow after the event: 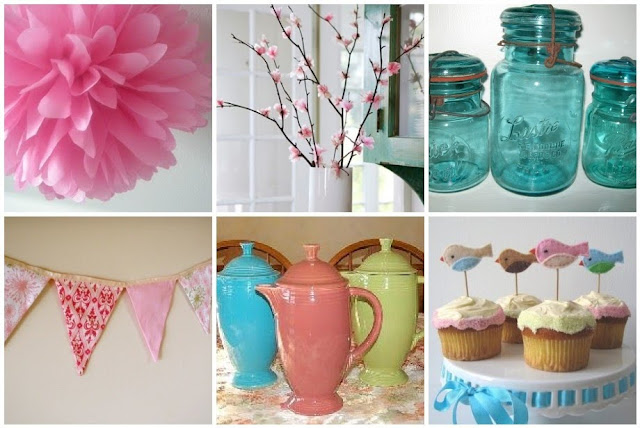 We want to do something branchy as a nod to the branches in the bedding, so Sara thought of tissue blossoms on real branches. We'll put them in her adorable blue mason jars. I have made a pennant style banner or bunting to hang over the mantel. Tissue paper poms are a given here--they cost about a dollar apiece to make, and they take up a lot of vertical space and bring color and texture to the ol' greige church room.  Between the two of us, we have several pieces of Fiesta, McCoy, and other colorful pottery that fits into the shower's color scheme, so we'll put the food on those pieces instead of fussy silver trays. We'll also  try to bring in birds in other ways (read: scrounging up bird figurines from friends and family).

I'm a little exhausted from folding and cutting tissue paper every night this week, but I am excited to see the results on Saturday! Pin It
Posted by Emily at 12:04 PM