The map-themed birthday was a big hit, especially with the guest of honor. We set up almost everything while he napped, and when he woke up and saw everything, he just kept saying, "Wow." It was the best reaction I could have hoped for. Although I like themes (okay, I have a theme sickness), I generally think super-specific themes are not worth the trouble and expense for toddler parties, but Graham is so OBSESSED with maps, flags, and globes that I felt like this theme would be worth it. 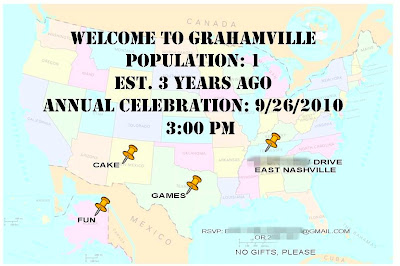 For decorations, we used (of course) tissue paper poms in lime, aqua, and orange, as well as hanging globe-printed beach balls. The colors were inspired by the bright map colors of his invitation. We placed some earth-printed and other solid-colored balloons around the yard, too.

Never one to miss an opportunity to beat a theme to death, I made little state maps for the food: Iowa (Caramel) Corn, California Grapes, Wisconsin Cheese, Idaho Potato Chips, and Georgia "Peanuts" (um, actually Nutter Butters, but you get the idea). We stuck to snacks because the party was at 3:00, between meal times.

My mom made the fantastic caramel corn, which we put in some DIY paper cones that I cut and stapled in coordinating paper.

We  went a little overboard on cake: Mom made a Tennessee-shaped chocolate cake, and I made cupcakes decorated with tiny state flags. Just about everyone had a serving of each.

The beverage table is covered in a fabric remnant my friend Mimi left at my house (thanks, Mim!). I think she had originally planned to recover a chair with this, but it made a perfect last-minute tablecloth. The beverage signs here  (Tennessee Tea and Florida Key Limeade) didn't turn out quite as planned--I had intended to tape them to the beverage jars but didn't think about condensation.  Oops. I ended up slapping them onto the lids, which I guess was okay.

We denoted the boundaries of the party (and of our yard) with some lines of flags (international, since I couldn't find any state flags like this and ran our of energy to make much more stuff). However, that didn't stop some Graham and his cousin Caspar for trying to ambush the golf course. Luckily, their dads intercepted them.

We got so lucky with the weather (70s and overcast!), so for activities we just put out lots of outdoor games and random seating throughout the yard and let the kids help themselves. We have a small cornhole set and a cheap ladder ball game (found at Aldi, of all places, for $5). We also left Graham's teensy Kangaroo Climber out, and we drug out his castle-shaped tent. All of these options made it easy for us to be fairly unstructured and just let the kids run around and be kids.

I resisted the tent at first, but Seth insisted, and it ended up being the hit of the party. We stretched the theme, figuring it was loosely related to the Grahamville idea, so we decided that Graham was king of Grahamville, and we stuck Seth's old prom king crown on him.

Oh, and a couple days before the party, I worried that there wasn't enough to do (ah, last minute freakouts) and ordered a parachute. The kids seemed to really enjoy it.

For favors, everyone left with a little bag containing an earth punch ball and some geography-themed treats: a Charleston Chew, Boston Baked Beans, and some flag-wrapped Tootsie Rolls.

Everyone had a great time, especially Graham. He's still talking about his "states party."