Well, I survived the Weekend of a Thousand Baby Showers. Okay, just two baby showers. But they were at the same time! I felt like I was in some stupid movie where I would jump up during my date and pretend to go to the restroom, only to rush off to a second date, changing bridesmaid dresses, hiding behind menus and wearing fake mustaches and whatnot. Perhaps I am mixing up my movie plot devices (we don't make it out to the movies much), but you get my point. There was a lot of running back and forth, and enough tissue paper pom poms to choke a horse. 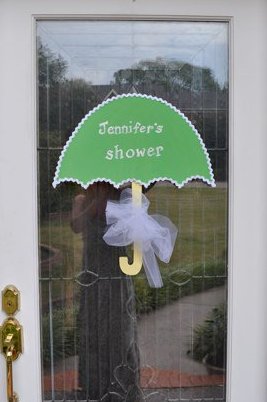 You may remember the gender-neutral, "shower" mood board I suggested for my sister Laura, co-host of her dear friend Jennifer's baby shower. She loved the theme, and so we ran with it! 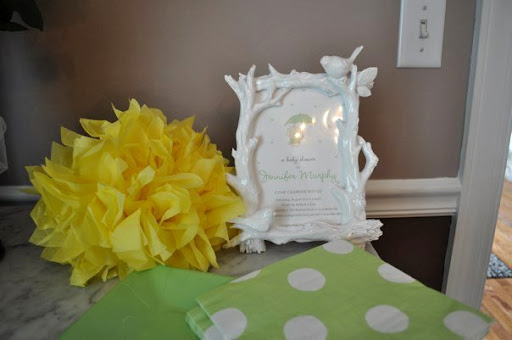 The adorable "Shower of Love" invitations from Paperspring fit our theme perfectly and set the tone for the shower/raindrop motif. The mom-to-be loved the invitations so much that we framed one to display at the shower. 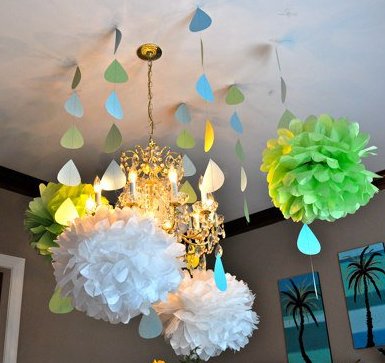 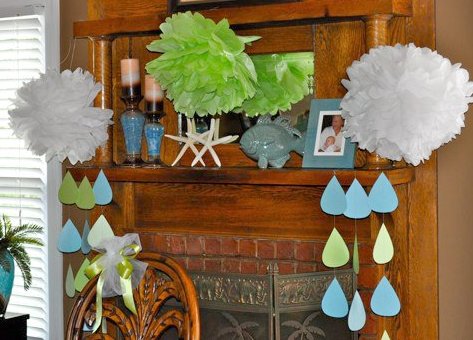 We hung green and white tissue poms with raindrop garland over the food and gift tables. I made the garlands by cutting raindrop shapes from textured, shimmery cardstock in blue and green, and then sewing (read: begging my sweet mom to come over and sew) them together with blue thread, leaving a couple inches in between them. 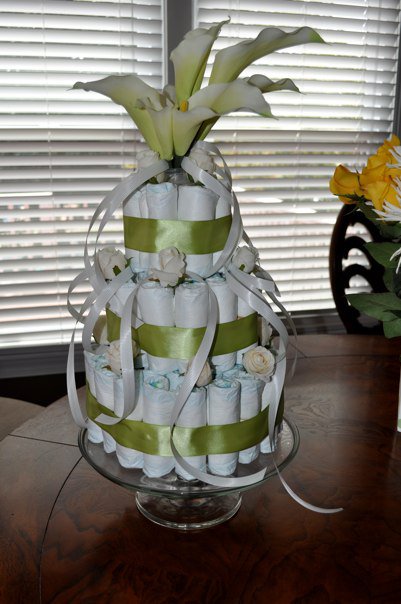 Can I just go on the record here and say it: I hate almost all shower games. Especially baby shower games. Who thinks of these things?. Sniffing chocolate candybar poop? Guessing the poor, swollen mother's girth wth toilet paper? Sucking a plastic fetus out of an ice cube? I can't think of many less pleasant ways to pass a couple hours with distant relatives. And my disgust has nothing to do with baby squeamishness--I say this as a mother myself, who has dealt with plenty of real baby poop, and with my own enormous pregnant stomach, and --well, I have never unfrozen a tiny fetus with my mouth before. I can't even begin to understand where this "game" came from. Luckily, the only "game" we played at Jennifer's shower was to guess how many diapers were in the adorable diaper cake my sister had made. I didn't even come close. Jennifer, who has made probably 20 of these diaper cakes herself, guessed the number right on the nose (56, I think?) and won the Panera gift card.

We decorated the sweet candy buffet with a name banner. Jennifer and her husband are keeping the baby's gender a surprise, but somewhere along the way, they began referring to the baby to be as the bean, and finally as "beaner." We liked the idea of a pretty banner with the goofy nickname written across it. 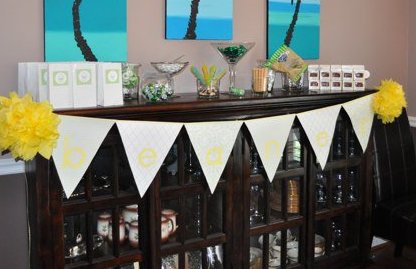 I don't have a fancy die-cut machine (someday!), so I just make stuff like this freehand. I cut sheets of cardstock into triangle pennants. Ordinarily I would print the letters on plain copy paper then trace them onto cardstock to cut them out; HOWEVER, our old janky computer hates me right now. Seth had to install an entirely new hard drive, and he's in the process of installing software, so right now we don't even have Microsoft Word. (I like to pretend this is all an elaborate ruse to surprise me with a new Mac Book on my birthday. THIS WEEKEND.)

Ahem. So, with no technology at my disposal, I got old school and used A CUP and A RULER to trace circles and lines, and I freehandedly (did I make up a word?) formed letters from them. I think it worked. Just don't look too closely. I glued the letters to the pennants; then, I sewed (okay, my mom again) a rick-rack border across the tops to hold everything together. Total cost: about $2 for the cardstock, and $2 for two 4-foot spools of rick-rack trim (I already had the glue. And the cup and the ruler, ha). Holla! 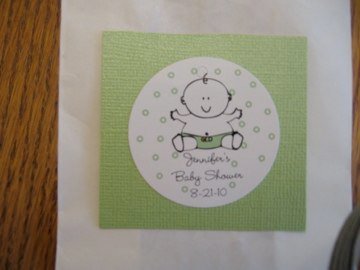 Also on the candy buffet were these adorable favor bags for guests to fill with treats, and some super-cute Kate Aspen "bun in the oven" candles. 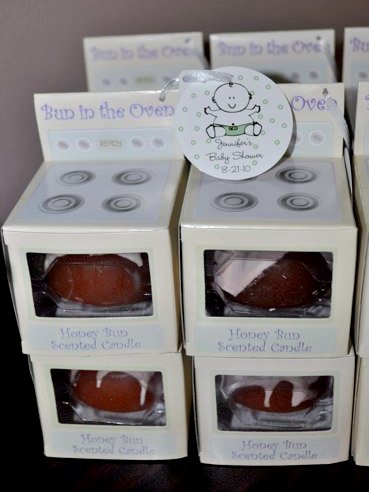 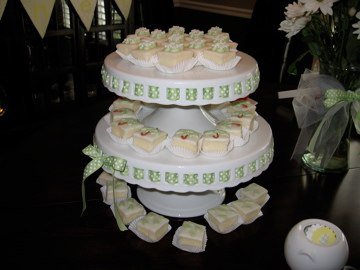 In addition to candy and various other sweet and savory treats, we had beautiful and delicious petit fours.  I cannot stress how adorable and scrumptious these were. 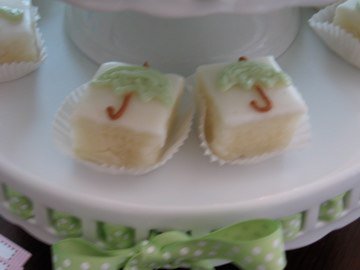 This was my first experience with A Perfect Bite, and I assure you it will not be my last. Owner Katie Winstead makes the most intricate, detailed treats that seriously melt in your mouth. Laura liked the tiny baby bootie petit fours Katie featured on her site, and when she mentioned the shower/raindrop theme, Katie was happy to come up with some designs in that motif as well. I can't wait for an excuse to order up some more treats from her. Nashvillians, take note! 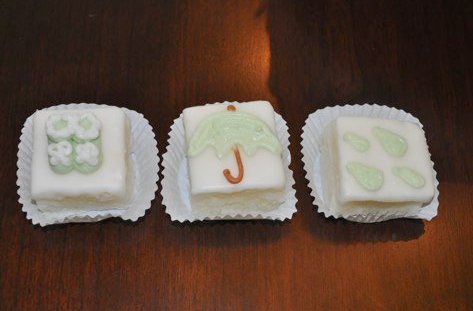 Man, I could go for some more of those right about now.

All in all, I'd say the shower was a huge success! We wish Jennifer and Kevin all the luck and happiness in the world with their little bean-to-be. Thanks for letting me be a part of your special day.

You need to hush, that is a beautiful picture of you! Gorgeous shower all around.

Hey Emily! Thank YOU for your post:) I'm so happy everyone enjoyed the petit fours! Thank you again!! I LOVE your blog! I want to have a party now!! Thank you again! www.aperfect-bite.blogspot.com

I love baby showers! They are so much fun and this shower is one great example. Everything looks lovely. Thanks for sharing. Such a great day for you all!

Are these pictures from Laura's camera or did you take them? I want copies of them as they are better than the ones I have from my mom and Mother in law. Thanks so much for all your work in making my shower great-it was just perfect! And perhaps a party revolving only around petit fours is in order...I think of them every day.